ORMOND BEACH, Fla. – Kate Smith’s golf hat collection has spilled out of her closet. Part of it now lives above the stairway in her apartment near the University of Nebraska. Add some hats from roommate Megan Whittaker’s collection and it makes for the kind of installation you might expect in the home of a graphic designer.

Smith and Whittaker both play on Nebraska’s women’s golf team. Smith is wrapping up an extra COVID year by taking on a fashion merchandising minor to go along with her graphic design degree.

“Graphic design is such an awesome major because I can do it at night and on a plane,” said Smith, who is still considering a playing career. “It’s worked out well so far.”

The hats are keepsakes that eventually inspired a career path. Even when she was a kid, her dad Kris would sometimes bring home a hat with a logo he thought his daughter, a budding designer, might appreciate. 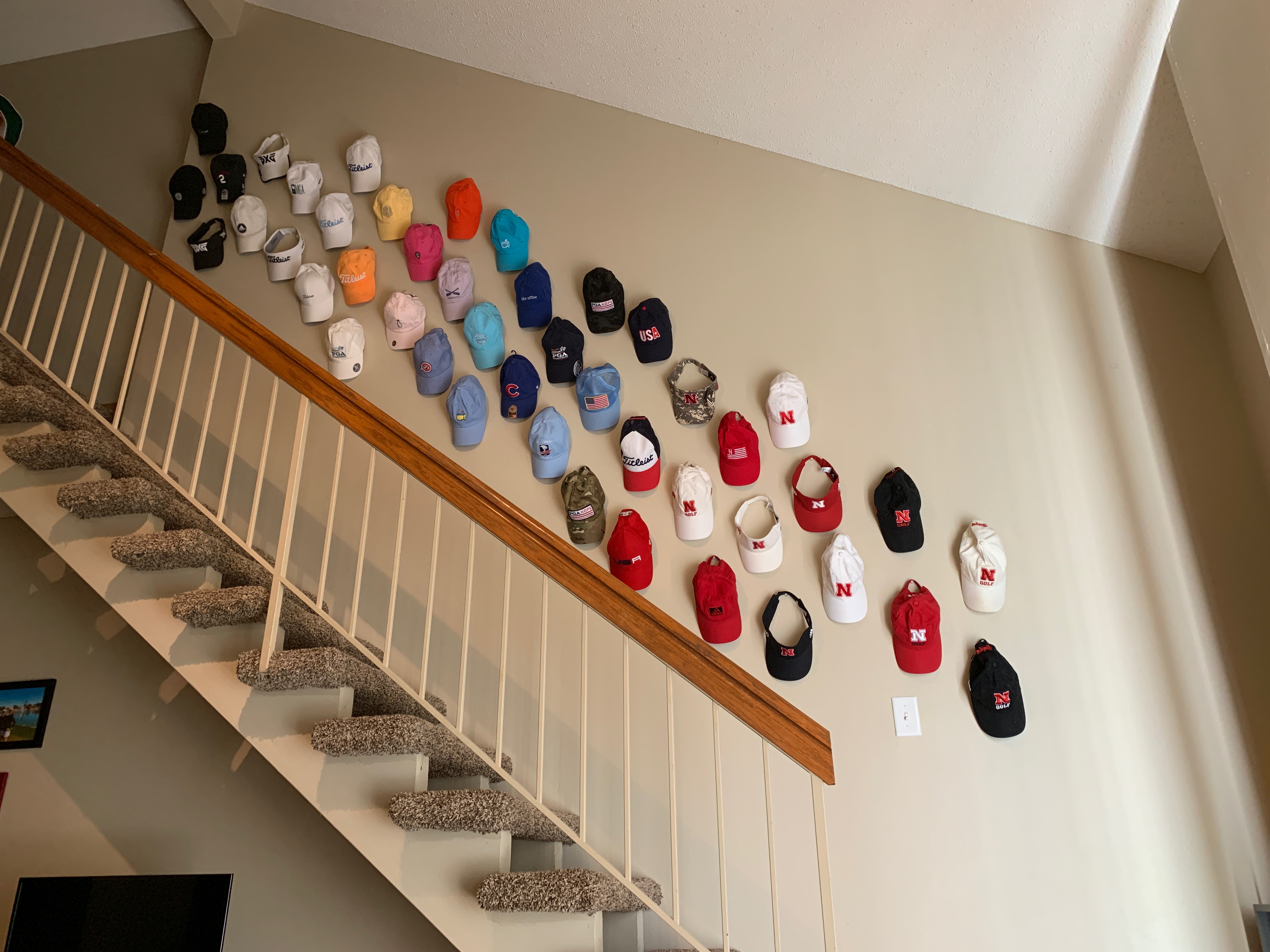 Kris, the PGA member and manager of the city-owned Lakeview Golf Course in Detroit Lakes, Minnesota, once brought home a cap from exclusive McArthur Golf Club in Hobe Sound, Florida. Its logo is a simple milk jug – much appreciated by Kate.

To this day, Kate names it as being among her favorite logos. There’s also Pebble Beach, Scioto and Winged Foot. Some of these courses she has never visited. At some, like Scioto, she has merely made a trip into the golf shop. Kate recognizes she can’t leave out Minnesota’s best and there plenty in that category. Windsong Farms and Hazeltine quickly come to mind.

There are plenty of golf fans out there with hat collections rivaling Kate Smith’s, but they likely don’t have their own personal collection of golf logos. That portfolio is still growing.

By the time Smith plays two more rounds at the Sally Amateur, she’ll have reached seven consecutive days of competitive golf between that tournament and last week’s Orlando International Amateur (where she finished T-22). At each such tournament, Smith as decided to give the course logo a refresh – she’s hashtagging it #LogosUnderRepair on Twitter where she’s posting the designs.

“I hope it doesn’t offend anybody that I’m redesigning their logos,” Smith explains. “It’s been really fun for me.”

After playing last week’s event at Orange County National, Smith’s logo upgrade included half a bright yellow orange to the left of the course name, in an updated typeface.

“Florida has kind of a flair to it and I wanted to express that in that logo,” she said.

Playing the historic Sally for the first time at Oceanside Country Club, Smith tried to work in the location a little more prominently. A wave now occupies the center of her revamped logo.

“You’re right near the ocean and you should know that when you see it,” she said.

Smith played her way into contention at the Sally Amateur on Thursday (rounds of 72-69 left her in second, two shots off the lead) in a bright pink long-sleeve top and a neon yellow skirt. She chose a hat from Moody Gardens in Galveston, Texas, noting that she might need to play a tournament there so she could add a Moody refresh to her list. There are pyramids (housing various nature exhibits) next to that golf course, and she’d like to see that become a bigger part of the logo.

Course logos make up a running dialogue in Smith’s head, and they always have. Part of that, she thinks, is inspired by her dad’s job as a PGA professional. Golf business naturally morphed into golf branding for Smith. Her designs are picking up some traction on social media, too.

“I definitely didn’t think people would enjoy them as much as they are,” she said. “It’s not like I’m viral but people like seeing it.”

Numbering them on her Twitter allows Smith to catalogue the places she’s been. It’s part travel journal and part budding portfolio.

This COVID season has amounted to many extra opportunities for Smith. Both parents were on hand at Oceanside to watch their daughter compete. Margery Smith took extra days away from work just in case COVID forces more spring golf cancellations. The Big 10 didn’t compete in the fall.

Still, Smith, the Detroit Lakes, Minnesota, native who was named Minnesota’s women’s co-player of the year in 2020, has risen to No. 161 in the World Amateur Golf Ranking. It helped her gain entry into the Sally for the first time and also got her into the U.S. Women’s Amateur for the first time ever.

“Anybody from the Midwest can tell you, you always feel a little bit behind with the climate,” she said. “I kind of feel like I got to catch up a little bit this year as far as rankings and tournaments. I got to play in my state am one last time, those type of things.

“I think a lot of us golfers, once we get to a certain level, we’re in a rush to play on the LPGA and we don’t realize how really cool these amateur events are.”

So Smith plays on in her golf and design journey, recognizing that there’s one coveted event that would throw the logo refresh operation out the window: the Augusta National Women’s Amateur.

“I wonder if I get in, I think I would just tweet that logo because I can’t redesign it,” she said. “That would be like golf sin.”

Home Trends – Furniture For Your Home

In Praise of Developers