My teacher passed away last month.

Evelyn Marie Harris Wynn, was a wife, proud mother and devoted advocate for inner-city black and Hispanic students enrolled in Miami-Dade County Public Schools. She was also the person who is personally responsible for my journey into journalism. More about that later.

Mrs. Wynn, as she was known to her students, died on April 20 after a long illness and valiant fight. She was 82.

Born in Fernandina Beach, Florida and the eldest of five children, she came to South Florida in the 1970s with her husband, William Austin Wynn. Together they promoted business development in black communities and ran Afro-Caribbean Import-Export at 741 NW 62nd St.

When William Wynn died of a heart attack in 1997, he was remembered as an “inner-city capitalist” and the first black vice president of the United Way of Dade County.

After receiving her bachelor’s of science from Bethune, Mrs. Wynn went on to earn a master’s degree in library science from Northern Colorado University.

For 35 years before her 1995 retirement, she would work as as a media specialist in Dade Schools, and her base would become Booker T. Washington; first when it was a junior high, which is where we met, and then during its second and present comeback as a high school.

While not among the school’s illustrative roster of blacks who graduated from Booker T. — after it became the second public high school built for Dade’s black residents in 1926 — she could have well be.

While I was a student at Booker T. Junior High, which reopened its doors as a senior high school in 1999, she never let us forget that every day we walked through the doors, we were walking in the footsteps of history.

In fact, among her many proud moments was her involvement in the design of the new Booker T. Washington High School’s state-of-the-art media center before construction, and her role as its first director.

She was also proud of me.

These are just some of the words that come to mind when I think about Mrs. Wynn. Of course, when you’re 12- and 14 years old, you don’t really have an appreciation for these characteristics. You, instead, stare at her poofy blond hair, trying to figure out the color and how it is always on point. You are reminded not only to watch your words in her presence, but to make sure your grammar and pronunciation are correct.

And when you’re a minority, like me and fellow Booker T. Tornadoes, you’re reminded to always carry yourself with dignity.

They no longer make teachers like her, Mrs. Norma Dwight and the late Mr. Wellington Gilbert, my language arts and band director, respectively. They were the best of friends, the “Three Musketeers.” They were dedicated not only to teaching as a profession, but to us.

They took us, and me in particular, under their wings far beyond the three years at Booker T.

While there, they showed us how to speak, how to carry ourselves. They reminded us every day that we were not defined by our inner-city Zip code.

Mrs. Wynn, in particular, is the person responsible for this wonderful career I’ve enjoyed as a journalist at the Miami Herald.

I was a ninth-grader in her gifted class at Booker T. when she decided to have a lesson on newspapers. We spent weeks learning about the medium, and the Herald in particular. Then one day, as our guest speakers, we had Editorial Board member Dorothy J. Gaiter and her husband, Herald City Editor John Brecher.

After they spoke, Mrs. Wynn asked in her don’t-embarrass-me-now tone, “Questions? ”

The room was silent.

Afraid our guests would think we were a group of disinterested inner-city kids, I started asking questions.

Brecher assumed I wanted to be a journalist. I didn’t. Like all Haitian kids, I was off to medical school to become a doctor — yes, even in ninth grade.

But he would tell Mrs. Wynn about the Herald’s high school internship program. Students, however, had to be 16, he said. I was 14.

Later that day, Brecher called Mrs. Wynn and told her they were taking applicants. He asked about me. Soon, she was driving me to my first — and only — job interview.

I got the job, and I have had it ever since.

Over the years, she would call to say how proud she was. Her son, Dwayne, told me she would demand silence during my radio and TV appearances. But she was the real star, along with her fellow teachers-turned-partners-in-crime at Booker T.

I am forever grateful for the lessons, and the dedication. All of us who were touched by her presence are incredibly blessed that we had someone who embodied the definition of teaching.

Evelyn Wynn’s dedication to her students and to this community knew no bounds. Hers was a long-fought battle following two months of hospitalization late last year.

As we gathered recently to remember her while wearing masks and practicing social distancing, I couldn’t help but think, had it not been for the novel coronavirus, we would have been able to fill both the gymnasium and auditorium at Booker T. for her going-home service.

Hers was a life well lived — and one of profound influence and impact.

The 31 best appliances to buy on sale for Memorial Day

Sat May 23 , 2020
Celebrate your holiday and save on these top-selling appliances. — Recommendations are independently chosen by Reviewed’s editors. Purchases you make through our links may earn us a commission. Whether you’re shopping for a new fridge or looking for a dishwasher that will make tackling your post-cookout cleanup a breeze, Memorial […] 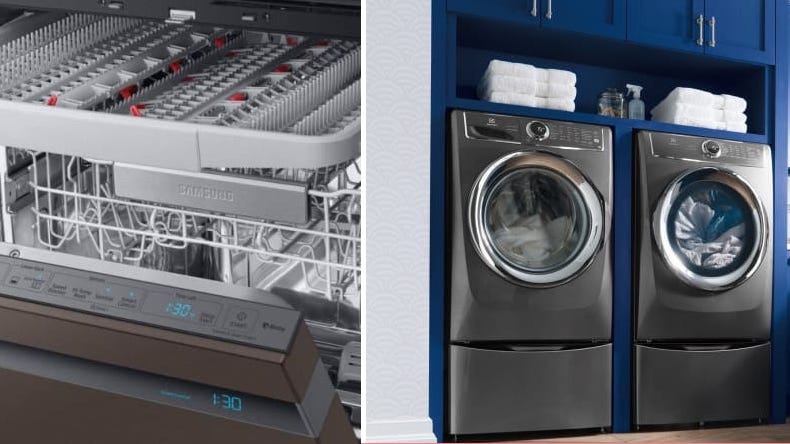